I've hinted about it and now it's time to get down to the brass tacks or fire brick as it may be; we have a furnace embedded in our floor. I was the one four years ago who said "sell it all, we need a different life!" which lead us to the Poor Farm 3 months ago. Keith was the one who uttered the crazy words of "Earthship Home." I was the one who countered with "Grain Bin House Baby!" While he completed the psychotic circle when he told me "Gonna build you a Rocket Mass Heater." Seriously, why can't we just give each other striped ties and crockpots like normal couples do? I heard that.


Don't worry. We haven't given up on the Earthship home aka The Tire House, it's just we can only build one home at a time. Go ahead and call us limited, you won't be the first. Our long range goal is to use the GBH, which we are building right now, for interns who want to spend time with us learning how to be more self sufficient. When it is completed as as finances allow we will start on the Earthship home.

When we planned (and I use that PLAN word quite loosely) to build the GBH we knew we wanted to keep the square footage small and the total build cost low. When both floors are completed we'll have about 700 total SF to ramble around in. At first we considered the basic floor mounted wood stove for heat but after finding out that a large amount of the heat generated pretty much goes right out the top of your home, that one must be prepared to feed in a lot of wood several times a day in very cold weather, and that chimney fires are a real threat, we settled on the Rocket Mass Heater or RMH.

Wickipedia does a good enough job of describing the general idea and a detailed explanation with lots of cool photos exists on Paul Wheaton's web page richsoil.com. but the resource we relied on most was the book written by Ianto Evans and Leslie Jackson called Rocket Mass Heaters Third Edition. We also consulted with our good friend Jay Molter of Molter Corporation who advised us on fire brick types, sizes and morter, insulating materials for the steel barrel and the basics of how not to burn down our new house.


Most examples we saw on the internet as well as one in person, the one at the top of this post built by friends of ours, consist of the rocket mass stove hooked into a large sofa or bench made of cob, concrete or other masonry type materials. As the stove burns its wood the masonry mass absorbs the heat and releases it over many many hours and depending on the size of your home, the efficiency of your stove, this release of heat may go on for two or three days. As much as Keith and I liked how this heater worked we were concerned about giving up so much floor space for the bench part. What if we didn't like where we put it? So because it was my turn for the next nutty idea, I suggested we make our "mass" the concrete floor of our bin. Hmmmmm.

We liked the idea but could not find too many other examples on the internet, lots and lots of benchs, beds and tables made into "mass" heaters but not so many floors, as in none. All the more reason for us to take on the task, we really like going where no man...or homesteader, has gone before. Now, if any of you know of someone who has done a RMH in the floor of their home (and they are still alive to tell about it) be sure to tell us.

Thus, after the gravel part of our GBH floor was tamped down firm, Keith began piecing together our stove. First we went to Menards where we were able to purchase all the stove pipe parts. After that a visit to Molter Corporation where we got our firebrick, Kaowool and morter. Our steel barrel was found locally. We then played with the firebrick configuration following the information given in the book by Evans and Jackson.

The base looks like this: (Don't you LOVE the floor underneath? Yeah, that's the 150 year old house on the property that is serving as our storage shed/barn/workshop/freezer hold etc...) 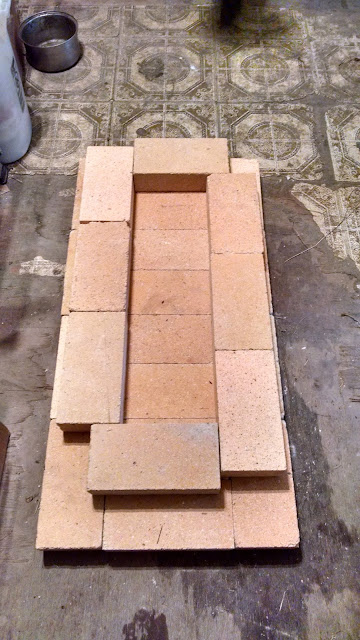 The next two photos are a couple of more prototypes. 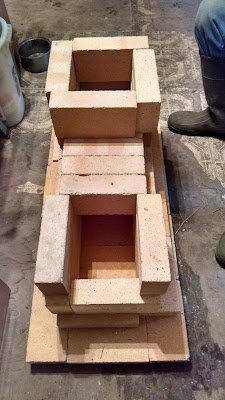 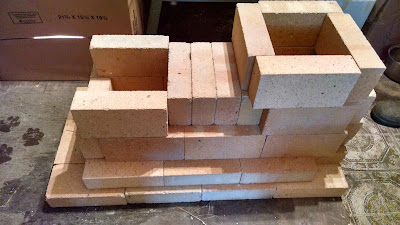 Finally, the partially completed version being set up on the gravel base of our GBH floor 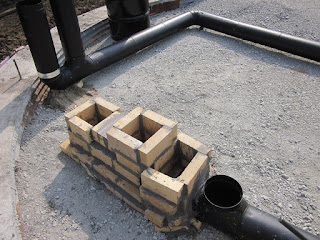 To the left (in the photo above) is the feed chamber where we feed in small 2-3 inch thick sticks rather than large logs. The room air rushes to the right (sounds like a rocket thus the name rocket mass heater) and will go up the middle section which will soon be covered with a burn chamber and steel barrel. Refer to the second photo in this post. This hot air comes back down within the burn chamber and feeds into the black pipe on the right. The hole in the black pipe will be level with the floor and serve as one of the cleanup holes; a place to vacuum out ash. Most of what you see in the above photo will be in our cement floor. 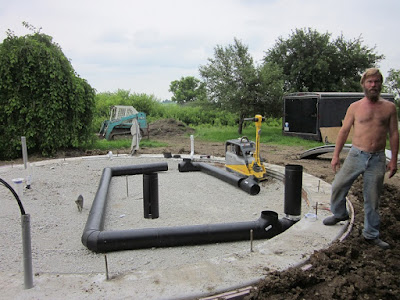 Above is more of the black stove pipe which had gravel packed against it to hold in place while the concrete was poured over top, resulting in 6 inches of concrete ABOVE the top surface of the stove pipe. The exhaust pipe heading straight up will be extended all the way up the inside of the GBH and out the ceiling. If all goes well what comes out of that exhaust pipe at roof level will be pure steam, NOT smoke as this RMH burns very hot and very clean.
Down below you can now see the feed and burn chambers as they look buried in our concrete floor. Our next step will be the placement of the steel barrel over the heat riser. This area will be one of the hottest sections of the stove and the top of the barrel can be used to cook food, raise bread, heat tea water, who knows; maybe we'll put a hot tub on top of it to make those cold winter night even more pleasurable. From all we have read if the RMH is built well we may only have to fire it up every three days in winter as the concrete floor will be enough mass to absorb and then release the heat steadily for that time period. Even if only once a day it will be far more efficient than a traditional wood stove. Only time, cold weather  and a bunch of little wood sticks will tell.


Posted by Donna OShaughnessy at 5:46 PM