The Grain Bin House: The Foundation Part 4 and The Rising of The Bin 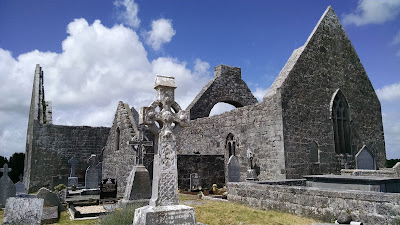 So, after a very pleasant sabbatical to Ireland for five weeks to attend an Irish Studies program at NUIG (National University Ireland, Galway) as part of my creative writing degree from UIUC (University of Illinois)...I am thrilled to be back on The Poor Farm. I was also thrilled to leave. Even more thrilled to have received the scholarships I did making the trip possible. What can I say? I'm easily thrilled.

Our Grain Bin House was put on hold in late June through mid July due to the unrelenting rains here in central Illinois. While I was gone I was disappointed that I was missing so much of the build and yet slightly happy it had been delayed. Keith kept me up to date via email and  finally Foster Mechanics were able to finish the foundation. Let me say it one more time...this crew was amazing in their work ethic. If you recall there was quite a deep "moat" left around the base of the foundation, it looked like this: 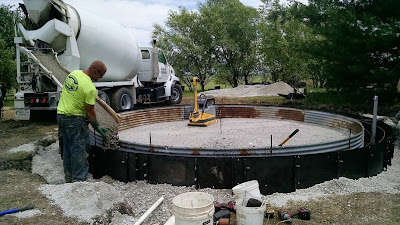 That moat was filled with concrete creating the thick outer foundation the grain bin would rest upon. After the concrete dried the gravel encircling the black metal form and holding it in place was dug out and put back inside the circle to build up the base for the floor. The black metal form was removed. Keith then wrapped 4 x 8 sheets, of pink Styrofoam board around the outside concrete ring, giving us a moisture barrier between the foundation and the soil. He held those Styrofoam boards in place with dirt and then backfilled completely. So now the foundation is complete and looks like this: 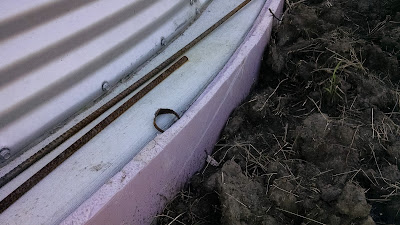 Eventually the dirt will come right up to the edge of the grain bin completely covering up the pink Styrofoam and it will slope away from the bin to ensure good drainage. The rising of the bin itself started from the top ring with the ceiling pieces attached and then was raised metal ring by metal ring. I have to digress here and give a special thanks to our son Colton who took these pictures in my absence. 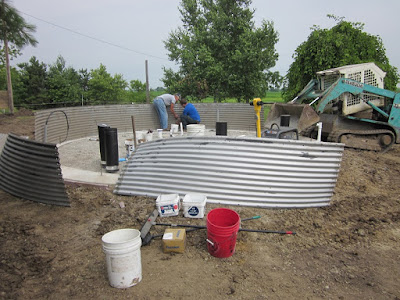 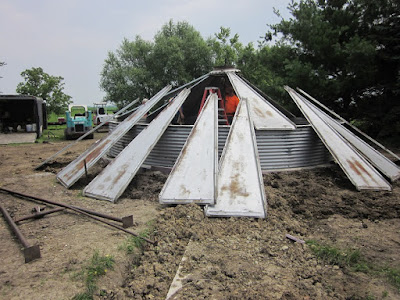 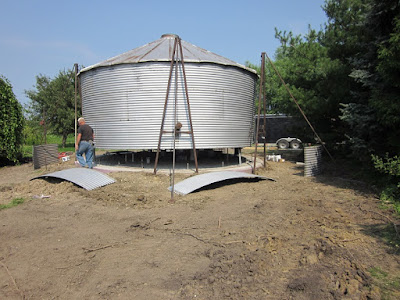 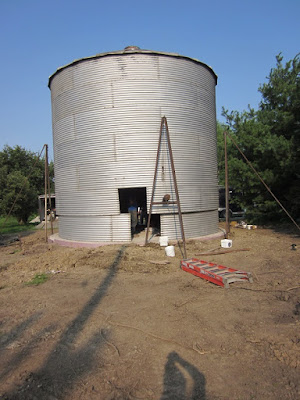 Although it resembles the leaning tower of Pisa in the pic above it is now quite level. Prior to the rising of the 21 foot diameter bin, Keith built our Rocket Mass Stove, embedding it in the concrete floor. Yes, our future "furnace" and only source of heat for our new home is buried under concrete. Well, about 1/2 of it is. Confused? Join the masses,  but after you see those pics I think you'll be as sold as I am on the concept. I'll cover all the RMS stuff in my next post. I promise it won't be six weeks from now.
Posted by Donna OShaughnessy at 5:49 PM 13 comments: