I blame all of it on aging, the way time just screams past. The older I get the shorter the days. I blink and my own children are middle aged,  I take a deep breath and my GK's are in high school. I cough and...never mind.

My baby sister, for crying out loud, turned fifty a couple days ago! Below is a rare pic of Keith and I together at her birthday party. 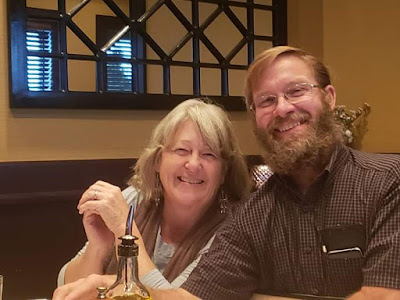 Each day I wake up with a long list of things to do, excited about the possibilities and then realize seconds later it's already midnight and I've accomplished only 1/10 of my goals. Faster and faster this carousel goes-but most days-I'm happy to ride it.

I'd just like to have one day a week drag a bit. Just one. I might blog more (among other things).

We did take some down time this past month though, and I'm so glad we did. I love the fall and hate how it speeds by. Early in the month Keith and I did the Spoon River Drive on the west side of Illinois. It was rainy and cold that weekend but that meant better deals at the flea markets! It's always easier to run around on rainy days anyways as we don't feel so guilty about not working back home 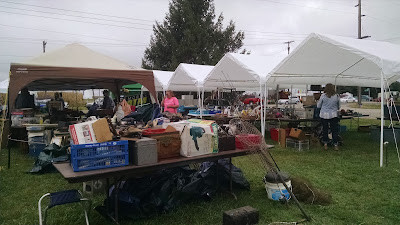 In mid- October my three sisters and I went away for two nights to the Lake Geneva area in Wisconsin. We try to get away together every year for a couple nights and this year we travelled about three hours north and rented a .Quirky-Fun-Eclectic-Artists home. We also found a farm slash winery that offered wine tasting out of their garage! We shopped, thrifted, ate out, talked and talked. I love my sisters dearly and treasure them more each year as we creep towards that sixth decade of life. Well, at least I'm creeping in that direction. Those other three are lagging behind. 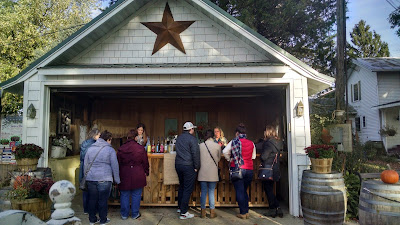 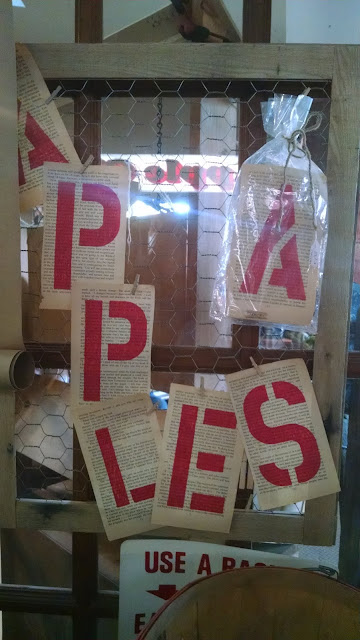 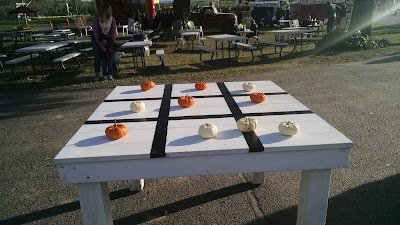 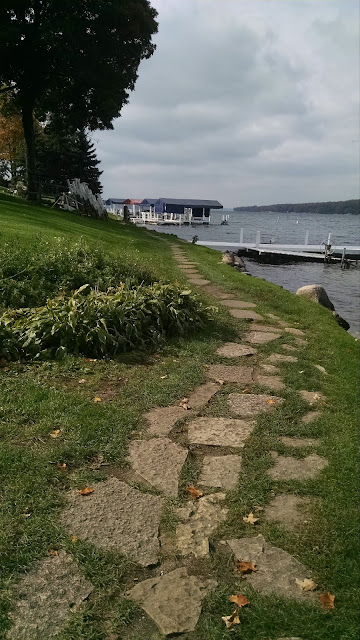 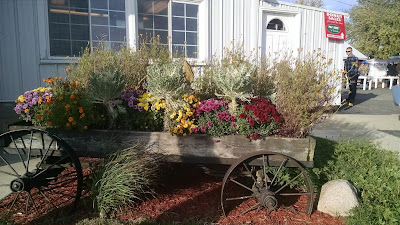 In the midst of the short trips I've been running a bit between some of the elderly folk in our family with Dr. appointments and surgeries, while enjoying the First Birthdays (!) of two of our youngest GK's born just 10 days apart. Happy birthday again to little Eli and September. We also found out last week that GK number seven is on its way. Our youngest son Kyle and his wife Amanda are expecting child number three due in May.

We're still plugging away at tearing down the old house. The second story is half gone and most of the good floorboards of the second story bedrooms are now relocated to the new barn where they'll be used to build lofts. Keith boarded up the open south side of the house for winter. Yesterday he started building some walls in the new barn and had me helping with some small concrete pours. It's nice to be back building up again instead of just tearing down. 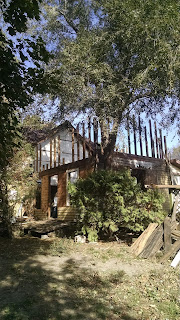 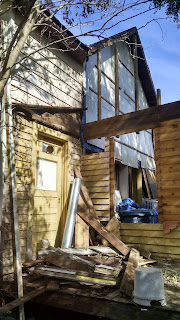 And then finally today, the last day of October and Halloween. Below is eleven year old GK Wesley aka Spiderman. I was able to spend an evening with him last week at his schools Fall Fest followed by a morning of thrift shopping. We are so blessed to have all six of our GK's within twenty minutes of us, not all in the same direction, but still, all are close. 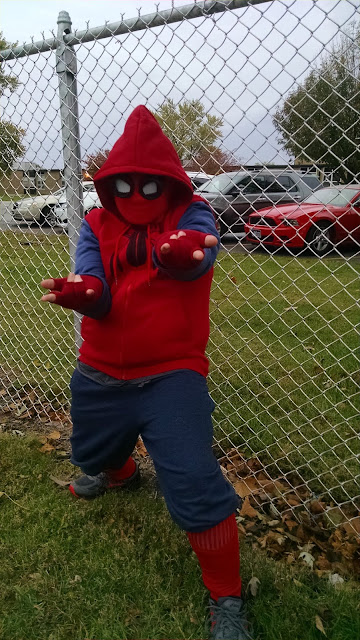 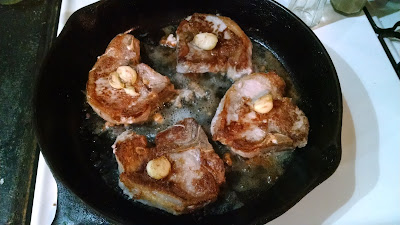 A couple of days ago I made pork chops for dinner and then posted the above photo and following comment on Facebook. "Pan fried, pasture raised, Red Wattle pork chops with home grown garlic. Tonight is an excellent night to be a homesteader."

A Facebook follower then sent me a message and asked "Could you explain the exact meaning of homesteader in this day and age?"  An excellent question. So, here you go M.K. a blog post about being a homesteader in 2018, but first a bit of history.

The original definition came from the federal Homestead Act of 1862. Specifically it applied to large areas of unsettled land, usually about 160 acres in the western states, which could be granted to any US citizen who lived and farmed that land for at least five acres. Today the definition is broad and encompasses a house, some outbuildings and people to live and work there. Usually, homesteader is applied to those who live in rural residences but the term "urban homesteader" has gained popularity. Think of those folks who raise veggies and bees on New York city rooftops.

The almighty Wikipedia further defines it as a lifestyle of self-sufficiency which includes food preservation, sustainable agriculture. and small scale production of salable goods like textiles or crafts. They also state that homesteading is more than just rural village or commune living in that most homesteads are isolated.

With all that said, here is what homesteading is to Keith and I. Simply, it just means raising, growing, cooking, preserving, recycling, reinventing, reusing as much as we can while spending as little as we can. We work extremely hard here at home so we don't have to work so hard away from home in order to enjoy our home.

I understand, that's a bit convoluted, especially in light of the fact that Keith has a full time off farm job. In fact, since we started this whole self-sufficient hippie homesteader thing just four years ago, it's unlikely we'll ever be totally self-sufficient by the time we die. But each year we get a bit closer. Our plan is for Keith and I both to be home full time.

Lets talk specifics about our self proclaimed homesteader label.

Food. We raise or grow about 80% of all our own food. This means all our meat: beef, pork and chicken, all our eggs and milk. We preserve (via canning or freezing) lots of veggies from our summer gardens but not yet enough to get us through the whole winter and spring. We do buy fruit, flour and sugar but raise bees for lots of honey. One day we'll raise our own wheat for flour, and we have several fruit trees gaining maturity. Any food scraps goes to dogs, chickens or pigs. Extras become fall décor. 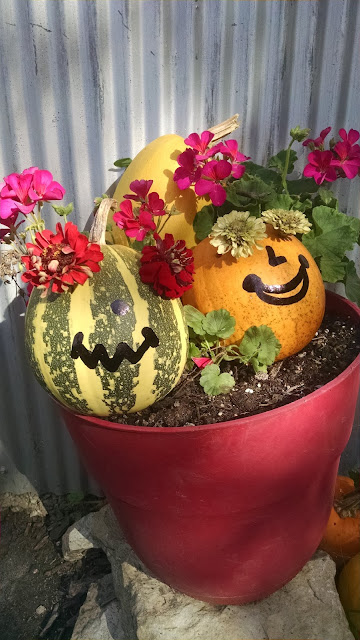 Clothing. No, I don't make our own clothes but we buy about 95% of our clothing in thrift stores or at garage sales. We also happily take freebie clothes offered from relatives. Keith usually needs replacement chore boots once a year and it's unusual to find good ones in his size at the thrift stores.

Utilities. We provide 100% of the heat needed in our grain bin house via our Rocket Mass Stove. The wood comes from our property which we gather and cut. We do use a small 100 pound propane tank to run our gas cook stove. Electricity still comes from "the man." as solar panels are not in our current budget. We do not own a microwave, dishwasher or clothes dryer so our electricity bill is small. We each have a simple smartphone and use TracFone for our data at the cost of $25/month for both. We do not have cable or regular TV, just Netflix at $7.99/month.

Disposable goods. We only buy toilet paper. A girl needs some luxuries. We do not buy paper towels, plates or napkins. No glad bags, aluminum foil or plastic wrap. We do use plastic bags given to us by family and we use newspaper to spread oil in pans, clean windows, wrap leftovers or to wrap gifts.

Home improvement projects. We recycle, reuse, beg, borrow and barter for supplies whenever we can. Currently we are dismantling an old house on our property and setting the pieces it aside to finish the building of a 'new" barn made with about 70% recycled materials. For example, the floorboards of the old house have been removed and set aside and soon will serve as the new floorboards in the two lofts of our barn. See picture below. 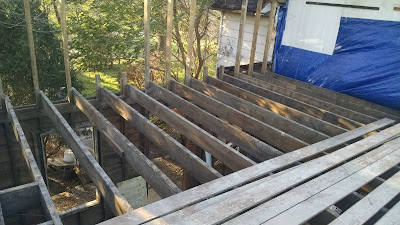 I thinks that's enough specifics. Overall for us M.K., homesteading means that if (when) our country's infrastructures begin to fail, we will have the ability to feed, heat and shelter ourselves and any other family members who want to jump aboard.  Like the homesteaders of the past, our residence is not likely to ever make the cover of Better Homes and Gardens but it will fill our bellies and keep us comfy and warm for some time to come.

Why do we homestead? Because it is a deeply satisfying (although often exhausting) way to live. I worked for others outside the home for decades, mostly in nursing. I made a good salary and had all the wonderful benefits but I did not have the benefit of time. My time did not belong to me, it belonged to my bosses. What I gained in "security" I lost in time away from my children, my husband and the pursuit of things that made me happy, like reading, writing and making super excellent tomato juice. 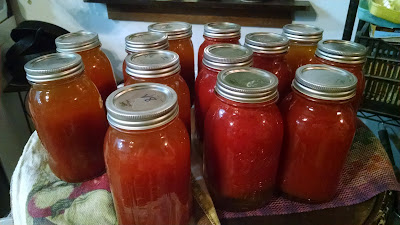 I hope that answers your question M.K. Thanks for asking it! 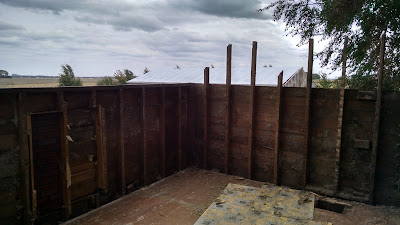 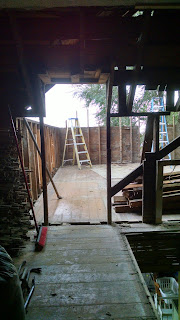 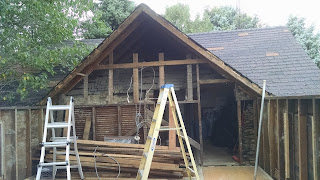 Demolition continues in the 1868 house with the roof of the south side completely removed by Keith along with a good hunk of the side walls in that upstairs section.  The picture above and on the left is taken looking south into what was once two upstairs bedrooms and a hallway. The picture on the right is taken while standing on a ladder and looking north into the section of the house which we will we will leave standing this winter.

The pics below give a better view of the floor boards that will be removed after the walls are down. We'll use that wood to build the lofts in the new barn. Since the staircase comes out of the newer (1900?) area of the house, we believe the two original floors were connected by only a ladder, Little House on the Prairie Style. 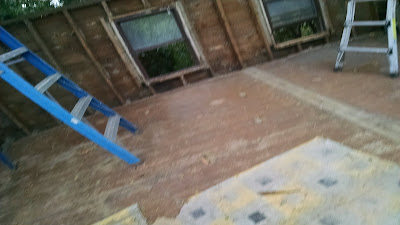 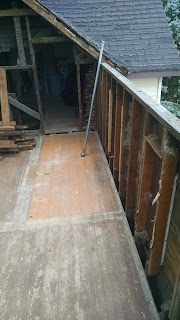 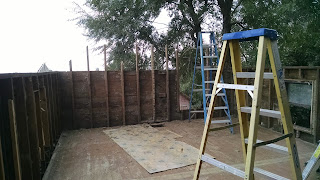 While up there I couldn't resist climbing on the ladder and taking some shots of the surrounding areas, even though everything all around the 1868 house is generally an organized mess. 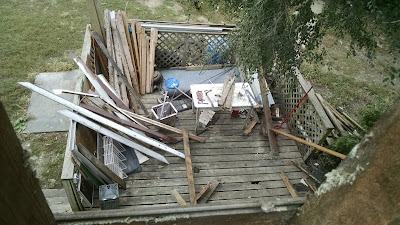 This is the old deck that Keith is using to sort lumber for reassignment, burn pile vs keep pile to be used in the barn. It was likely added onto the house in the 70's. Just south of that is... 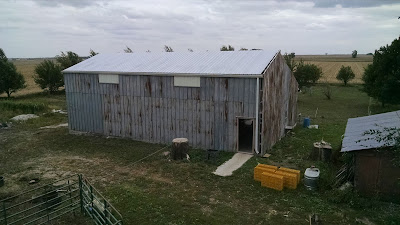 our new barn. I like this view because it shows all the recycled steel sides from the 1950's machine shed we bought, had dismantled and moved here, and then reconstructed, along with the brand new steel roof. The south side of the barn still needs closing in.

Behind the barn is my horses pasture. To the right is our current feed shed which is in poor condition but we'll tackle THAT project another year! Moving around to the east... 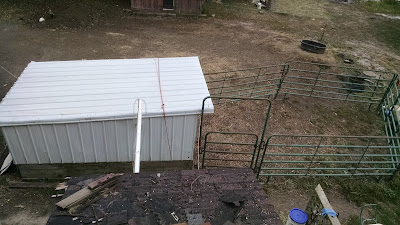 is our current cow milking shed. Keith built it a few years ago and it's holding up well. The white pipe running from it to the old house, connects to the vacuum pump still located in the small section of back porch of the house not yet removed. That part won't be torn down until we can move the vacuum pump into the new barn for milking. It's huge and heavy. We use the green metal pen just to corral Liz long enough for milking. The rest of the day she is out on pasture. Moving further north east... 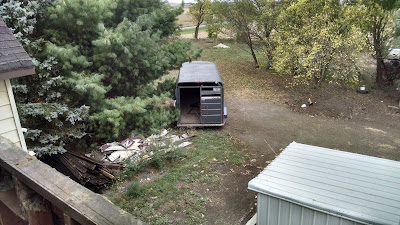 you can see the livestock trailer which will be loaded up with all the recycled aluminum siding (the pile of beige) torn off the house. That livestock trailer has been put to use for many tasks this year, not the least of which was actual hauling of livestock.

That concludes todays tour. Please leave your donations at the front desk.
Posted by Donna OShaughnessy at 9:58 PM 13 comments: