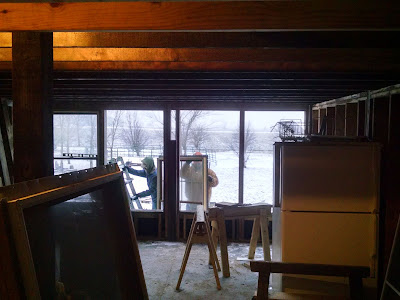 The weather has eased a tad, and in between snow and ice storms, fog and floods, Keith has managed to work on the barn build. Winter 2019 has been a serious challenge for outside work here.

Today he and our son Jason put in the four large, double pane windows (36" x 48") that Jason sourced for us for just $40 each. His boss was remodeling and no longer needed them.

It took Keith many mornings to get the framing done, all with recycled wood form the 1868 house,  but tonight the two of them made this homesteader very happy. 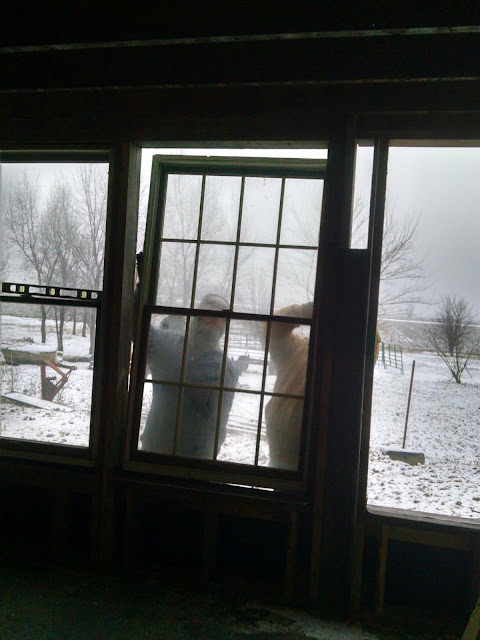 After the electrical is complete, the upper windows installed, the walls are finished, the doors put in place and the ceiling installed we'll have a room big enough for our large farm table, about 16 x 24 feet.  The room, not the table.

This means in good weather we can host larger groups of folks for meals, holiday get togethers and the like. It also means that we'll have a green house area since the windows face south.
A few tall metal racks, which I'll be looking for at future garage sales, will hold our garden seedlings and/or extend our growing season.

Up above this room will be our storage loft for non-feed items like soap making supplies, extra furniture, my canning supplies, seasonal clothing, our bee keeping items and all the stuff we need but not on a daily basis. We have discovered over the last four years that although small house living is nice in theory, it sucks for storing the items homesteaders need to function.

I'm so excited to see these two rooms coming closer to completion!
The animals are too since the window installation will now slow the wind and snow from blowing into their areas just to the right of Keith in the picture below. 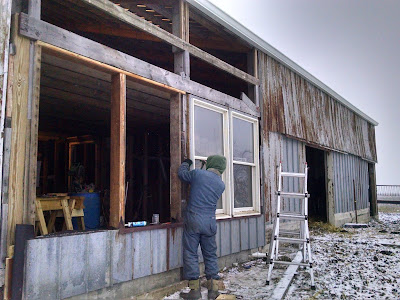 I see red geranium filled window boxes below those windows, don't you?


I am embarrassed to admit that I was in Walmart the other night, a store I abhor, (I was buying fabric for a sewing lesson my daughter graciously bought me as a Christmas present) when I noted that milk was on sale for $1 per gallon.

It chills my blood to see that. Sure, it might seem a great deal to the consumer, but it is the producer, the dairy farmer, that suffers. Walmart loves doing it because offering this milk as a "loss leader" brings in additional customers who will no doubt pick up ten other items they don't need on their way out of the store. It's no coincidence that this bargain is located at the back of the store, so many other useless items to see on your journey back there.

But when milk is offered at this cut rate price everyone suffers. The dairy farmer cannot exist on the payment they receive for their product as it is.  Currently in the US, they collect $15.30 per hundred weight of milk if they are selling conventional (non-organic) milk to a large conglomerate like Prairie Farms. That's right, they receive jut $15.30 for every hundred pounds of milk . Since there is 8.6 pounds of milk in one gallon they are therefore getting approximately $1.32 for every gallon they produce. At least this month they are. Milk prices for conventional famers fluctuate widely in the US.

In addition it is unlikely they are able to produce that gallon of milk for $1.32/gallon which is why so many farmers work off farm jobs to pay expenses or, they will increase their herd size in order to spread out expenses. But more cows means more feed, bigger barns, more equipment, more land, more insurance and increased debt. This move towards bigger farms began decades ago when Secretary of Agriculture Earl Butz spewed his mantra "Get Big or Get Out".

Thus the reason so many smaller dairy farmers, those who own 200 cows or less, have run screaming from the dairy business, and why more mega dairies like Fair Oaks, have erupted with their Factory Farms. There they keep over 35,000 cows which produce nearly 300,000 gallons of milk a day. Don't let the red wood veneered barn on their web site fool you, this outfit is a full blown profit centered corporation that offers restaurant dining, gift shop cruising, and bus tours. Because you know, one can really get an accurate sense of true farming from the inside of a cushy-seated, climate-controlled bus!

If you do take a Fair Oaks tour (only $10 for a three year old) don't expect to have the opportunity to actually pet one of these bovines.  Heaven forbid. Fair Oaks is "bio-secure" so as to protect their herd from any nasty germs visitors might bring in and furthermore, we can't have wee Sally leaving the farm with manure on her shoes can we?


All of this is to say that small family farms are rapidly disappearing from our landscape.  Over the last eighty years in the US the number of farms has decreased from more than six million in 1935 to less than two million in 2019. Meanwhile, the farm SIZE has more than doubled. Gone are the days where a drive in the country revealed sheep, pigs, cows, chickens and goats on pasture. Instead they are kept "bio-secure" in sterile metal buildings often with concrete under their feet and fluorescent lights over their heads. Their lifespans are short and they have virtually no immune systems. They are fed cheap corn, prophylactic antibiotics, and confined to inhumanely small areas.

And every time you as consumer purchase that cheap milk you are compounding the problem.

What to do? Take a bit of time to think about your purchases. Explore the small farmers in your area who sell milk (or meat or vegetables) directly to the consumer and consider buying from them more often. If every consumer just purchased 10% of their food directly from the farm, through farm co-ops or at farmers markets, a difference could be made.

Either that or the only farm livestock you or your grandchildren will see fifty years from now will be from a helicopter tour.