Early last year I shared with you our budget for 2017, covering everyday items like income, livestock care, utilities, food, car repairs and more.

In the next few posts I'll tell you how we came out at year end. First though, I want to get our taxes done, a process I am looking forward to. Why? Because for the first time in over 25 years, our income is so low, our financial life so simply mundane, that we can complete the tax forms ourselves.

No more accountants. No more asinine tax forms like Interest and Ordinary Dividends (Form 1040A Schedule B), Capital Gains and Losses (Schedule D), Profit or Loss from Farming (Schedule F), Passive Activity Loss limitations (Form 8582) and so on.

"Passive Activity"  I wonder what government entity came up with that oxymoronic form title?

Ah well, you get the point. In years past it would take us days and days to collect all our sales info and other farm related data for our annual meeting with our tax guy. We never really knew how we would come out as we could not keep up with the ever changing agricultural tax laws. Thus the reason we had a tax guy. Some years we had losses and paid less tax, while other years when we were more "successful",  those profits went right back into some bureaucrats pocket.

This year we'll just hop on the TurboTax site where we can complete the 1040 EZ form FOR FREE.
We received the last W-2 Form for my small nursing pension just yesterday so tomorrow...is tax filing day.

I really am so excited and I just can't hide it!
Posted by Donna OShaughnessy at 8:17 PM 11 comments:

A Happy Pig is a Muddy Pig

The weather continues to vex us. Very cold then unusually warm. Good amounts of snow, then ice, then fog like we had yesterday. But at least the ground thawed enough to let our four feeder pigs out of their small training pen and into a bigger lot. 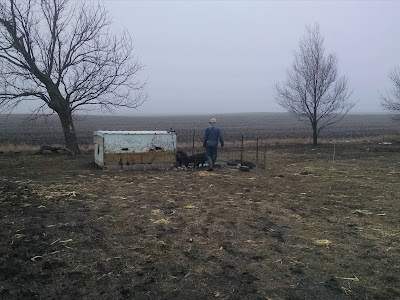 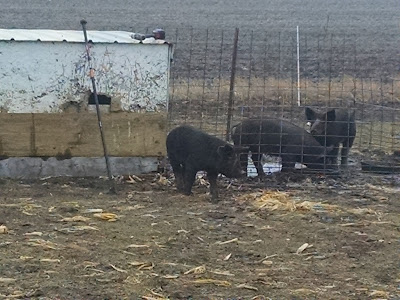 Feeder pigs. I love that term. We feed them and soon enough they end up feeding us. Sheer poetry I tell ya.

For the last month they have had a large boxy building and a closed-in section for exercise. The back of the fenced area above had a hot wire across it to teach them electricity hurts, stay away. Normally we have our feeder pigs out of the training pen in a week or two, but with the horrible cold we figured keeping them in closer quarters kept them warmer.

But when the thermometer got up in the fifties again yesterday, we knew it was time to get them in a bigger area. Keith put in additional fiberglass posts and then strung two hot wires around a 100 foot by 80 foot area. We opened up their playpen and let them go. 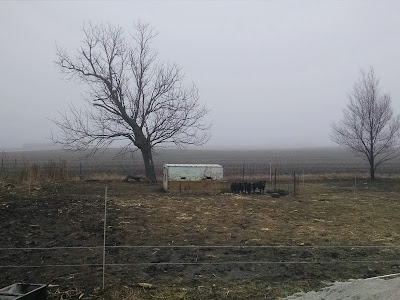 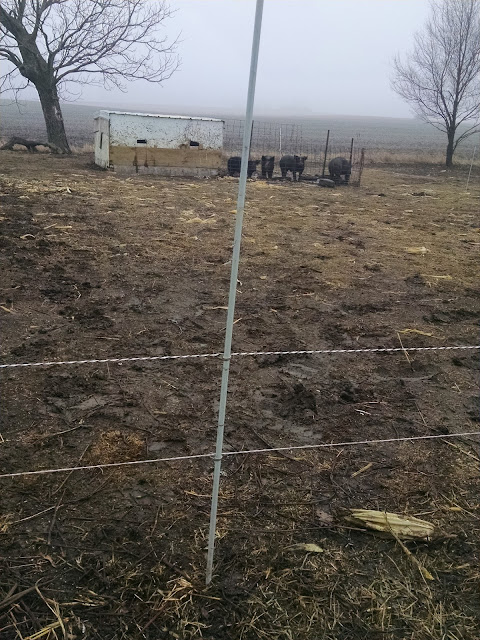 They did well with the electric fence, hitting it with noses a couple times and then going backwards instead of through the fence as hogs will do if they are not familiar with electric fencing. Once they had their perimeter scoped out they starting running from end to end, jumping and twisting their bodies in midair. What? You've never seen a pig dance?

It reminded me of this ridiculous you tube video I once found where a female scientist was defending the awful confinement hog operations, stating that hogs did not need any room to move or turn.  She said "they don't even like to turn around." What an eejit. 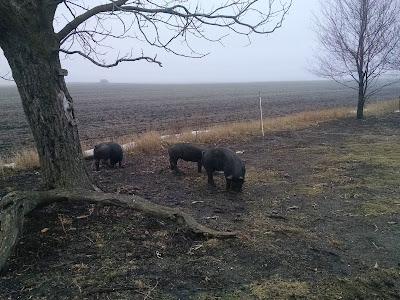 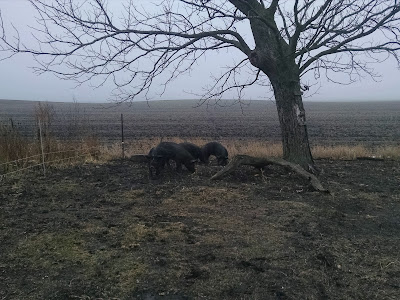 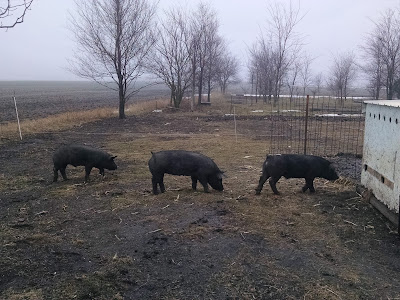 Hard to believe these guys are black and white, not just black as they appear in the photos,  but they've had a good time rolling in the mud. They are growing well on a diet of cracked corn, raw milk from our cow Liz and veggies from the kitchen. In the next couple of days I'll make an appointment with the locker for late April. Good thing. I ate our last pork chop from our fall hogs a couple of days ago.
Posted by Donna OShaughnessy at 7:31 PM 20 comments:


So I complained about the cold. My punishment? A bizarre heat wave followed by more bitter cold. You would think at age 58 I'd shut my gob.

Thursday evening it was 60 degrees F when I went outside to do evening chores. But we'd read the reports  and we knew evil was lurking behind those grey clouds on the horizon. Still I threw caution to the wind an on a January day I went out in just a t-shirt. Ten minutes later the temp starting dropping. I went back to the house for a light jacket. 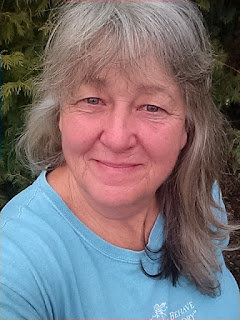 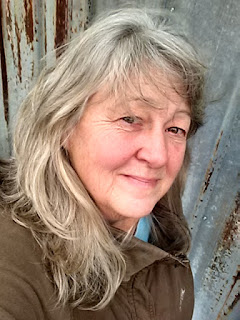 Ten minutes after that, the wind picked up and the temp dropped even more. I went back again and put a rain coat on over my jacket as dark clouds were creeping up quickly. 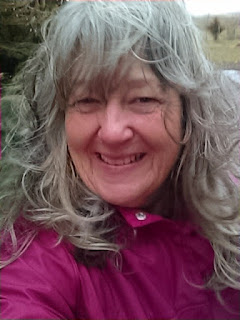 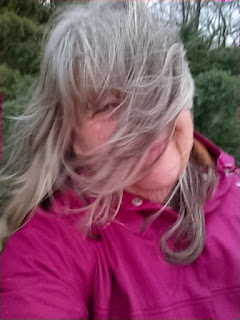 Ten minutes after the raincoat, it got so cold I needed a hat and gloves to finish watering the livestock.

Even the dogs, well especially the dogs, knew something was up and kept watching the sky.

In a matter of just 30 minutes the temperature dropped nearly 30 degrees and the wind went from 5 mph to gusts of 25 mph. By late that evening we were back in the low teens. The high that day (60 F) was eighty degrees higher than the lowest temp we had the week before which was -20F.

Mother Nature you are indeed a schizophrenic wench. 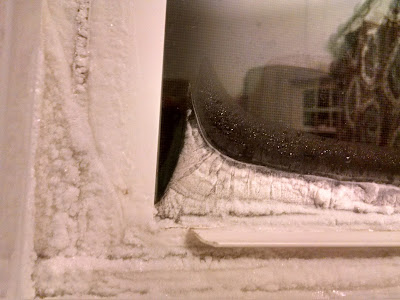 Right now, this second, we're having a heat wave. A tropical heat wave, or so it feels to us. It is 33 degrees F outside and a very comfy 70 degrees inside, even though I've not burned the rocket mass heater for almost 24 hours.

I love that! No heat source running in the house and it's cozy as can be.

The last two weeks however, were not so pleasant due to record
lows in Central Illinois and other parts of the country. A week ago today we woke to -20 degrees


outside (this was not a wind chill reading but an actual temperature) and 56 degrees inside. The picture above is of our bathroom window that frigid morning. We might have to do a bit more window sealing this spring.

The inside temp did not bother us that much. On those brisk mornings we make coffee, wrap up in robes and blankets on the couch and have deeply intellectual banter.

He: I suppose someone should get the fire started
She: That might be good.
He: It got pretty cold in here overnight.
She: Yes it did.

Just because we own a rocket mass stove doesn't mean we have rocket science conversations.

Eventually one of us moves towards the large rust colored metal barrel in our grain bin house, scoops out the old ash from the feed chamber in the concrete floor and starts rolling up kindling wood and newspaper. A match is lit and VOILA' we have the onset of heat. 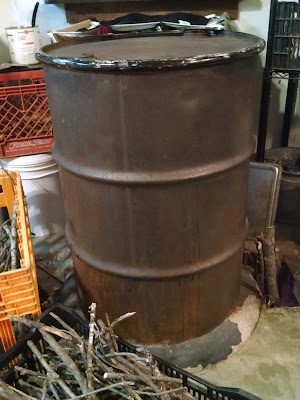 Within 5 minutes the barrel is too hot to touch and the thermometer above our kitchen table starts to creep skyward. Within an hour and after approximately one five gallon bucket of 1-2 inch sticks (not logs) the indoor temp will be up about 5 degrees and we are comfortable. Within two hours the temp will be up ten degrees or so and Keith will have his shirt off. 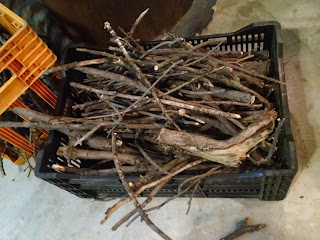 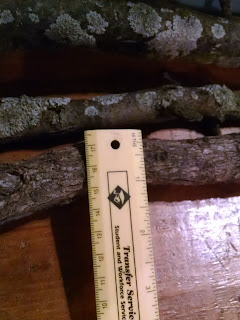 At its worst last week we did burn the stove twice a day for 3-4 hours each time which is very unusual. In a normal winter where lows are in the 20's we only burn it in the evenings for 2-3 hours. Still, running it longer during those frigid days was not a big deal (easy for ME to say as Keith chopped all the wood!) Especially since it cost us nothing in fuel, just time. We had no furnace repairs, or empty tanks of propane to worry about as others in our region did. 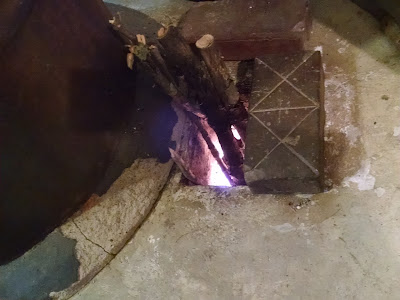 Tomorrow it is expected to get in the 50's and it will be a muddy mess here due to the extra snow we've had, but who cares?  I get to hang out laundry. 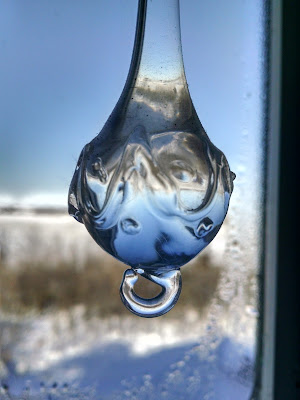