Warning. if you are a vegetarian or someone who believes all the meat they buy in the grocery store or order at the restaurant comes from a magical mystery place where all animals just drift into the freezer department by the gilded propellant of fairy dust, then this blog won't be for you.

But if you believe as we do, that a certain amount of responsibility comes with being a meat eater, that the best meat comes from humane family farms rather than factory farms,  that raising your own meat is one of the healthiest things you can do for yourself and your family, then read on.

Last week we tackled the all important,but not so much fun task, of broiler chicken butchering. We've done it every fall for many years for one basic reason: the meat is so much better. We raise them outdoors, with organic feed, leftover milk from our cow and lots of run to roam. They get to scratch in the dirt, eat bugs and grass and act like real chickens, unlike the millions of birds raised in this country in horrific, crowded, indoor conditions.

Normally we purchase 20 or so but we hated running out of chicken before the next fall so we bought 31 newly hatched broilers this time. Still not enough for the whole year so we plan to buy more in the spring. When they arrived several weeks ago, we kept them under warm cozy lights for a couple weeks then  slowly acclimated them to the outside. Then they were turned into an old garden area which we expanded by week four into a larger part of the old garden. Two weeks later we expanded that into a large pastured area with grass and more bugs and lots of room to run. By the end of their time with us the number though had decreased to 28.

Not sure where the other three ended up. Possibly in the belly of a hawk, or the jaws of a hog, we have chalk it up to the cost of doing business. 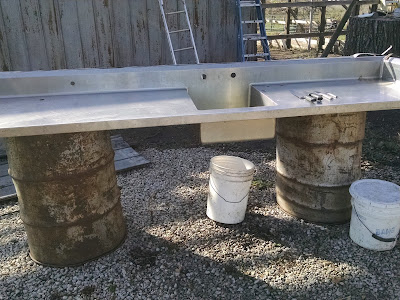 Because Keith is home just a few hours each day during the week, we were only able to get 10 chickens in the freezer, but we hope to complete the rest of the group later this week. It was in the high 50's on Tuesday and not too windy, so after prepping our cutting table, the feather picker, the scalder, the chopping block, as well as sharpening knives and gathering buckets for the blood and the offal (intestines, feet, heads ), we got busy.

We rounded several broilers up in a corner of the fence putting 3-5 of them at one time in a large cage. Then one by one we followed this procedure: 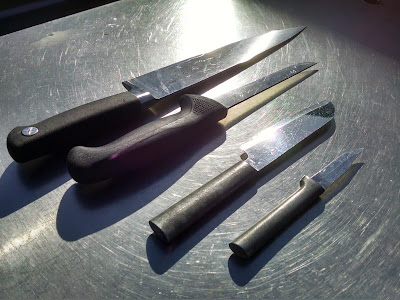 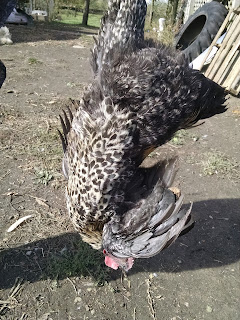 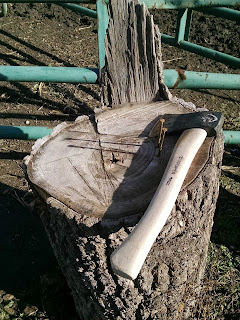 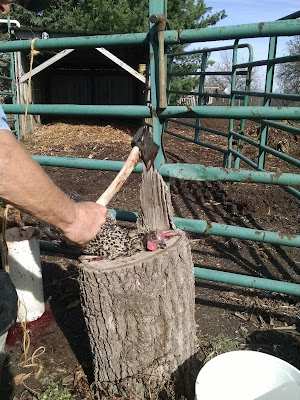 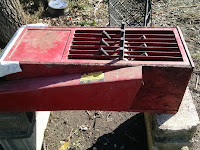 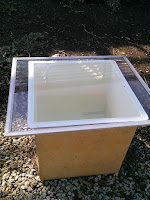 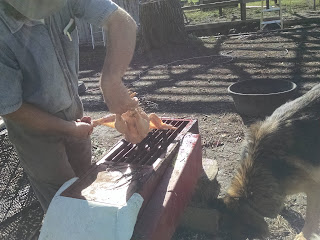 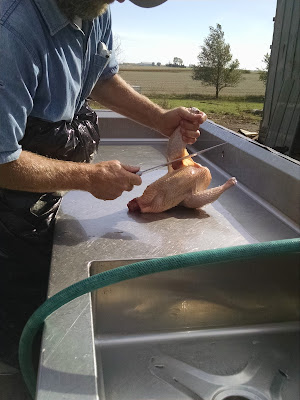 It is a time consuming and very messy job but the satisfaction of raising, humanely killing, preserving and later preparing your own meat is immeasurable.

Now back to Off With Their Heads part. In the past we've used a killing cone (a metal cone where they go in head first and it is open at the end),where we cut their juggler vein while they hung in the cone.  This year, I wanted to try chopping off their head entirely on a large wood stump

It did kill them quickly, but I am still unsure which process I prefer. Yes, they do flop about and blood does splatter if you don't put them in the plastic field tile right away and allow the blood to drain, but I hated the throat slitting method we've done up until now.  For me it seemed more barbaric, and I believe even though it lasted only a few seconds, more painful. The clean cutting off of the head, the absolute separation of church from state appears most humane.

Humane killing. An oxymoron if ever there was one.

Either way, we do get covered with some blood and feathers but we work hard to keep the whole cutting process very clean. We use a big stainless steel sink and counter propped on two barrels and cold running water from the spigot, to keep surfaces and the chicken 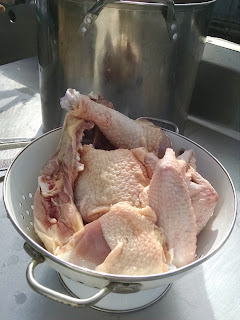 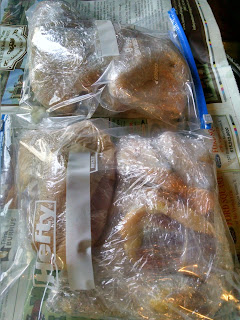 Also, it was cold enough that we had no flies to deal with, just a couple of mongrel dogs who love standing by for the offal which they believe is pretty wonderful. 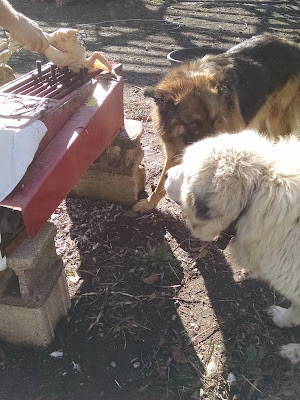 Now, the really wonderful news...Ten days after the birth of our fifth GK, the sixth GK arrived. Son of our youngest boy Kyle and his wife Amanda, the awesome Eli was born last evening. He weighed over two pounds more than his wee cousin September and evens out the score.  We now have three granddaughters and three grandsons. So much to be grateful for . 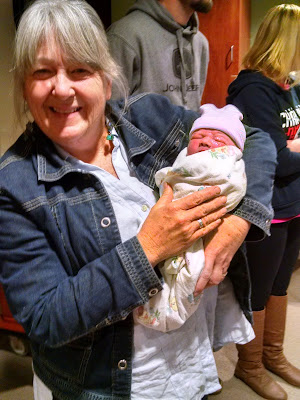 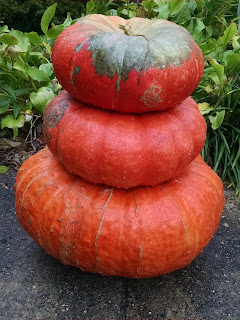 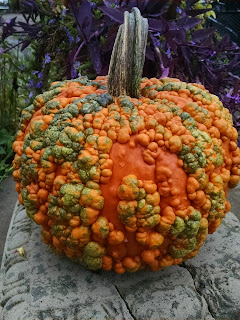 Whether you're a fan of Bob Seegers song (Turn! Turn! Turn! To Everything There is a Season) or prefer to get your profundities from the Book of Ecclesiastes, I think you'll agree that Fall is a season of great change. Of course that depends on where you live, but here in the often insipid Midwest, Fall has a way of shocking us into paying attention.


The weather spoiled us up until three days ago with 70 plus degree days and balmy low 60's nights, but then cold, blowing rain started in. Todays high was just in the 50's and the low tonight will be only 34! Yikes. It has delayed our plans to butcher chickens this past weekend since we do all that loose feather stuff outside, but we did manage to get a few side panels up on the barn.


We're digging into the 3 foot by 10 foot panels from the recycled machine shed we had torn down, saving the new steel panels for the roof. Before we put each in place Keith uses a pipe and hammer to reshape. Some pieces are too bent up to use in their entirety, but will be cut as fill-in pieces later on. 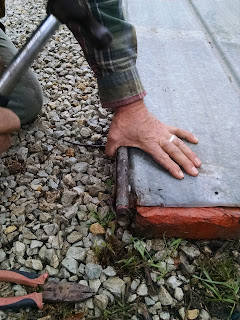 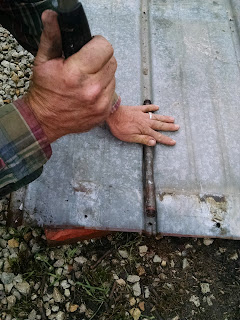 Because the panels are narrow the wind does not catch them too badly when we raise them into place. While I hold one metal panel against the framing, Keith puts in the first couple screws. After that he works up high while I work down low (ALWAYS, he takes the high road). Using two drills, yes I have my own, it takes just a couple minutes to get the panel screwed in place. 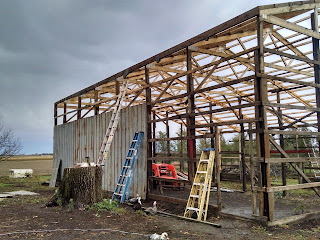 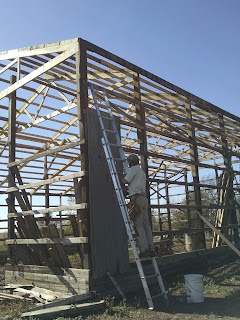 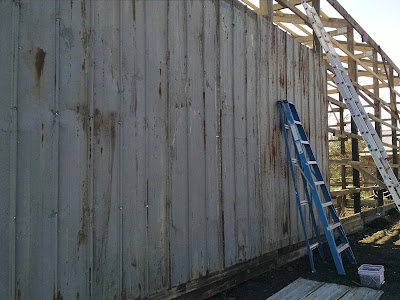 The panels do have holes in them from the nails used sixty years ago when they were first put up, so we'll need to caulk them eventually. And there is age related rust. The plan is to paint these old steel  panels with the same aluminum paint we used on the outside of our mudroom attached to the Looney Bin. All in good time my pretty.

In the meantime, another Big Huge Wonderful Change! Our fifth grandchild, with the perfect Fall name of September, has arrived. She blew in a couple weeks early and so is on the dinky side at 5 pounds 9oz, but since her father, our oldest son, weighed in at over 10 pounds, (they used a fork lift to get him out) I'm sure her mother was happy her daughter did not follow in dad's footsteps.

September joins our other four grandkids Nicole 15, Allana 13, Wesley 10 and Easton 2. To add to all the fun, little Easton is expecting a brother any day now, which will bring our GK count to 6. Three girls, three boys. We are so blessed. 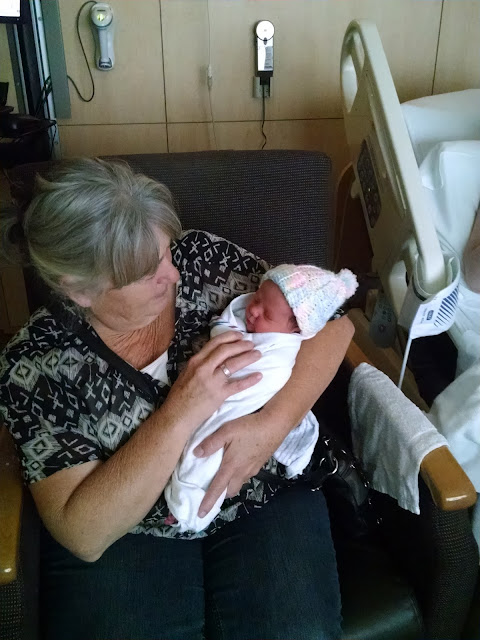 Full Freezers and an Empty Barn

Never in my farm life, have I had such a difficult time keeping up with my blogs. I only have two but still...I'm way behind. It's not as if I have nothing to blog about, I have tons, but doing what we need to do and finding the time to write about it, has become extremely difficult.

Especially when you take an entire weekend off to run around with your sisters! Inexcusable I tell ya.
It was a grand time though, me and my three female siblings on a road trip with two whole nights away. We spent the majority of the time just talking and eating and driving and talking some more. Oh, and laughing or "cackling'' as our spouses refer to it. Whatever. We had fun.

On The Poor Farm home front however, fall is here with all it's work related anxiety. So much to get done before winter!  We did finally get  some decent rain and with the warm days and cool nights, some renewed pasture growth. A sweet treat for cow Liz, horse Ennis and the steers. Before our two biggest beefy fellows got too comfy though, Keith hauled them off to the locker as planned. While there he picked up our whole hog, which sat curing at the same locker for the last three weeks.


As soon as Keith and I got our meat all unloaded and reorganized in our freezers we were frying up the bacon (our first in months) for BLT's. I also set aside some pork chops for my own evening meal and threw a five pound bag of pork fat on the counter to thaw for lard making tomorrow. While digging about in our freezers we found several beef marrow bones so they went into a crock pot to simmer for hours and hours to make beef broth.

This Saturday we start broiler chicken butchering. We have 28 to do and plan to do them in two lots. 14 this weekend and 14 next weekend. Like the pork, we've been without our own chicken for a couple months and refusing to buy store pork or chicken, we've been eating LOTS of beef. So happy to have more variety in the meat part of our diets.

It's our own fault. Once you start growing your own food it becomes increasingly difficult to stomach factory farmed or restaurant food.


The framing is complete and limestone has been delivered to go under the concrete which was supposed to be poured tonight for the shop area. Unfortunately the concrete guy has gotten tied up with another job so won't be here until the first week of November to pour the concrete. Ah well, gives us even more time to save up the money needed to pay for said services. 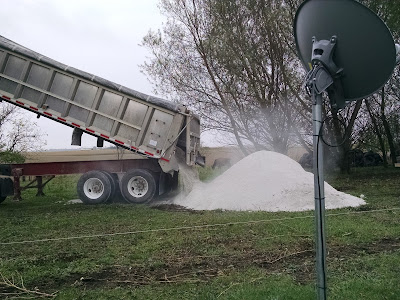 Tomorrow Keith and I will start attaching the steel walls to the outside of the barn, followed by the roof. If the weather holds and we're not pulled in other directions we might have walls and roof attached by the time the concrete guy shows up.