Reach for the Sky you Rascally Rafter You

We're really moving now! Room divisions have been made on the second floor ; a teeny office for the writer chick, a modest bedroom for the chick and her guy, and a decent enough sized library for most of the books neither the writer chick or her guy could ever part with. (Yes, I understand one should not end a sentence with a preposition but I am a creative writer. Which means I can make stuff up.)

Our challenge though was how to build the walls all the way up to the peaked ceiling and then how to put in the ceiling rafters which will hold the drywall which will hold the insulation up against the top of the bin.  Keith and our son Jason worked it out though and as you can see...it was genius. The height of the walls will make even the smallest room look bigger and give us more vertical space for storage. 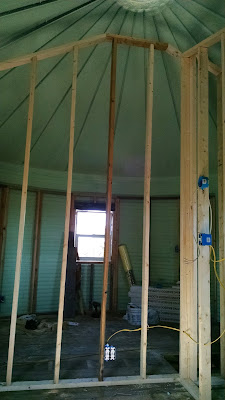 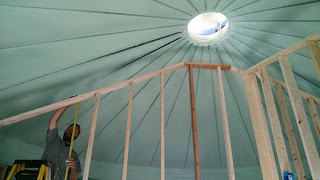 In the corner of our bedroom where the rafters meet the grain bins top portal we will one day put a skylight. But for this winter that portal will be in the closed position and we will insulate it with a circle of foam and some kitchy fabric wrapped around it for fun, you know like how your orthodontist used to put pics of Davey Jones on the ceiling above you so you wouldn't notice the pain in your mouth as he wrapped ungiving wire in and out and around and through every crooked tooth in your head?

So back to rafters. Keith once again used a combination of used and salvaged wood, since looks didn't matter only structure did. It took him many hours to cut each rafter in order to get it to end around the portals circular opening plus lots of shims and small wood blocks to keep it somewhat centered. Oh how I wish I could afford a skylight or stained glass for that opening RIGHT NOW, but we cannot. All in good time my pretty. 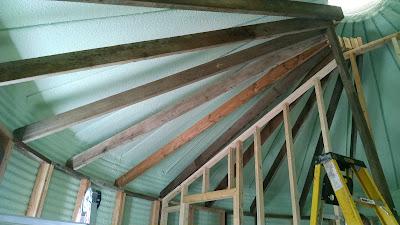 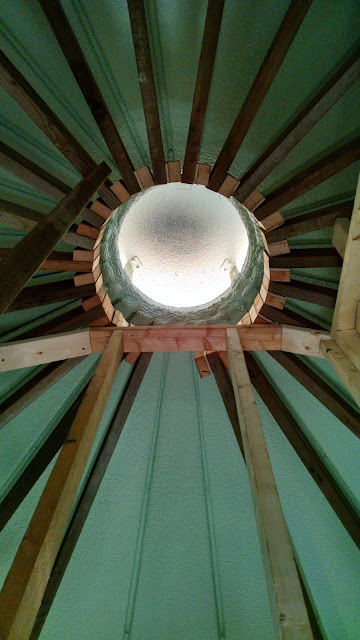 Last weekend our son Kyle did the majority of the inside electrical work and we only have a few more lights to buy. I scored on a bathroom light for $6 at Menards on their lower clearance shelf, a cool outdoor light for $4 and an overhead light for my office for $3 at the Restore (Habitat for Humanity in Champaign) as well at 8 wall sconces for just $6 each at PACC salvage store in Urbana. Lighting and electrical work is crazy expensive so we are so thrilled we have two sons who love to play with voltage or is it ampage? Me...I never touch the stuff.

Tomorrow, the whole place gets another dose of insulation, blown in cellulose behind all the framing, and on Friday the dry waller comes. It's been an exhausting few months for everyone but it looks like we may get inside this little metal cone yet!

﻿
Ah yes, once again the blogger goes missing. Proof that life has gotten even busier. I returned to UIUC full time last fall and now this fall, I am officially a senior senior.  With luck and tons more ink for my printer, I'll graduate with my degree in creative writing in May. Meanwhile back at The Poor Farm, construction on the GBH continues. Much has been accomplished which is indeed Martha, a good thing, since our move in date is still projected for Oct 17.
I am aware that at one time I said the date would be Oct. 1. I was fully outfitted in rose colored glasses that day. With Keith working here and there for a farmer friend of ours during this harvest season, plus Keith's mishap with the circular saw that required 17 stitches in a finger (he is ok and the finger is healing well)  my school classes and long commute time, we're had some setbacks; but we are barreling forward again. Much gratitude goes to our three sons who continue to help whenever they can even though they all have jobs/lives/families of their own.

To date:
The second floor is complete (not the whole second story, just the floor)
All windows are roughly framed in
The second floor (main interior wall) is framed in.
The bottom floor is wired and has electrical power.
The entry door is installed (needs door knob)
The small water heater (20 gal) has been purchased
The ancient well has been modified

I'll start first with the last item and cover some of the other items in later blogs this week. The well. You might recall it was the original well probably built in the mid 1860's or so when the house was built. We had the option of leaving it in its crumbling state which was also dangerous due to its large opening at the top and decaying well house or modify it and make it safe. No permit required to keep it treacherous, go figure that logic out,  but $100 permit and inspection by the county health department required to modify it and bring it up to code.

Estimates on a new well were coming in at $16,000 and we couldn't leave the old one in its crumbling condition so we paid to have it modified. At a cost of about $2500 we now have a new cap. We also removed the old well house and secured the area around the well. Keith also managed to remove THREE big bull snakes who were enjoying their cozy life in that well house. No foul no harm, the snakes are beneficial for controlling farm mice and rats, but they were deported to the site of the old crumbling barn where they can work their magic without us having to view their long wriggling, sliminess.

Moving the well house was a creative challenge and the beam rising in the GBH was, and once again we were not sure what it was Keith had in mind to accomplish this feat but accomplish it he did, with help from son Colton. First a basic hay rack had to be maneuvered inside the old well house which was sitting on a very rickety, falling apart foundation of badly poured, thin concrete. To do this Keith cut out sections of the front of the well house and then after pushing the hay wagon in place he and Colton cut out the back side. 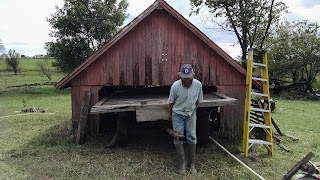 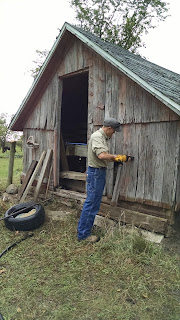 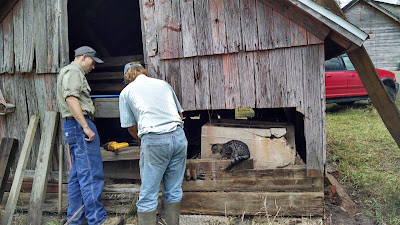 This allowed them to jack up the well house onto several 2 x 4's, 2 x 8's, and 2 by whatevers they could find, to lift the house off its foundation.

He then hooked up the truck to the hay wagon and began to slowly puuuullllll it forward and away from the well so the company we hired to modify it could get in and do their work.


Dang it if Keith's plan didn't work again. Well house removed! We'll repurpose it into a chicken coop next spring. Or perhaps make our own covered bridge feature for the farm. 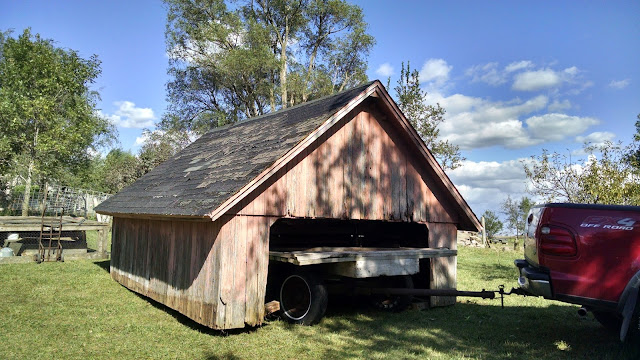 Several pieces of metalergic history was uncovered with the well remodel, like this: 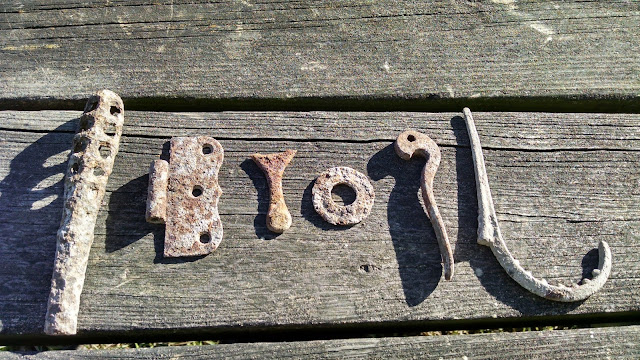 Which allowed me the opportunity to practice the very challenging creative writing I've been studying. 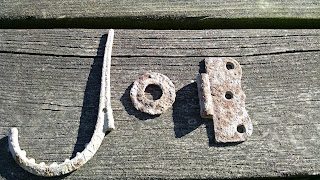 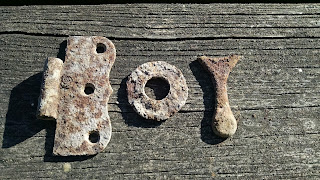 I don't have pics of the actual well revision which involved digging down several feet alongside it in order to remove century old tiles (I was in class that day) but the end result was a much safer well. We still must cover the pit that holds our pressure tank but Keith assures me...he has a plan for that as well.