Homesteading is Not for Weaklings, Woosies, Wankers or Wannabees 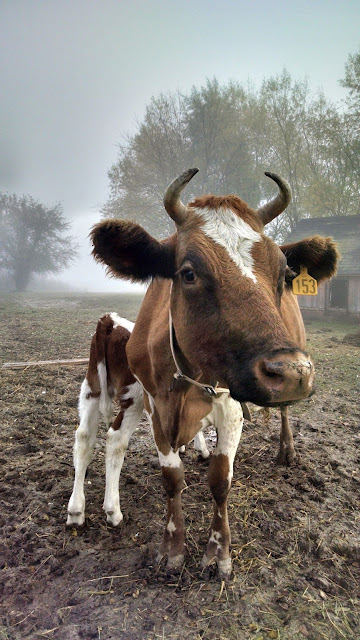 Since the grain bin house is now in it's final stages of completion: painting, light fixture hanging, floor trim, counter top building, etc...I will shift focus outside now and then, to the rest of our homesteading world.

Sadly though, it took a turn towards crap this past week; our bovine extraordinare, Polly, died.

The vets's term is "Hardware disease." The cause of death was organ failure due to ingestion of a foreign object; she ate metal. This has been a concern of ours since we bought this land two years ago and even more so, when we moved our livestock here in April. These 7 acres were filled with trash, much of it on the surface and large portions partially buried. It had been owned by a bank for a few years and prior to that owned by someone who cared not for the land. Polly was the last of our animals we brought to The Poor Farm from our old farm. For months we have been hunter-gatherers of century old bedsprings, barbwire rolls, tin cans, piles of glass, rusty fence posts, ad infinitum.  We have made significant progress but apparently it was too little, too late for Polly.

She went off feed first and her milk production decreased, and so with a 7 week old bull calf at her side; we decided to stop milking her to allow him to get enough of the nutrition he needed. From time to time we saw her eating some, drinking some, but on day three of this behavior, concerned about her dehydration status we called the vet. He confirmed our beliefs, gave her a bolus of fluids and antibiotics, something we only use when an animals life is at risk and hers definitely was.

She perked up, got up, but 12 hours later laid down and died.

Thus the crux of this post; homesteading is not for weaklings, woosies, wankers or wannabees. In the midst of the romantic overload of articles in popular magazines, newspapers and idealistic blogs with titles like, "Anyone can Farm " or "Make a Living on 1/2 an acre in 5 Easy Steps" and "You Too Can Get Rich Selling Arugula" its easy to assume that the perfect pastoral life is there for the taking. All one has to do is throw on some Land's End boots, a $90 Eddie Bauer flannel shirt and the country life will surround you with all her milk and honey goodness. But, honest homesteading is hard: physically, emotionally, monetarily and spiritually.

It's not like we haven't lost animals before. Life does indeed involve death. But Polly was gentle and kind, a joy to milk. Cows like that are rare. Her loss hit us hard because we cannot easily replace her; she was not a pet, she was our sole source of milk. Soon we would also be using all that milk as our sole source of butter and cheese as well. There is no longer a large herd from which we can pick a sub. Small dairy farms in this area, where its likely we could obtain a healthy cow, are limited. In addition, a replacement cow can easily cost $1200 or more. If we buy a young heifer for less, it will take a year of more before she is bred, calves, and can produce milk.

Watching her calf grieve was tough as well. Animals may not feel loss as we do, but they definately suffer when one of them dies, as is clear in these photos of Polly's baby just after her demise. 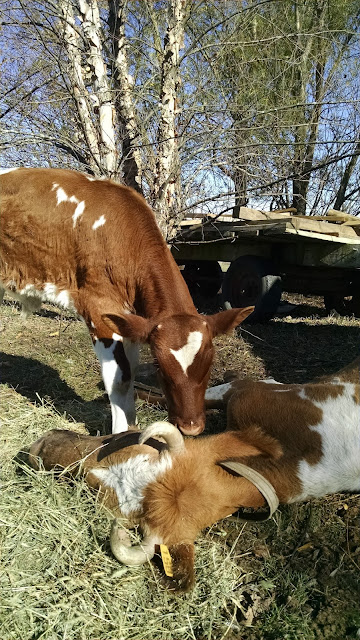 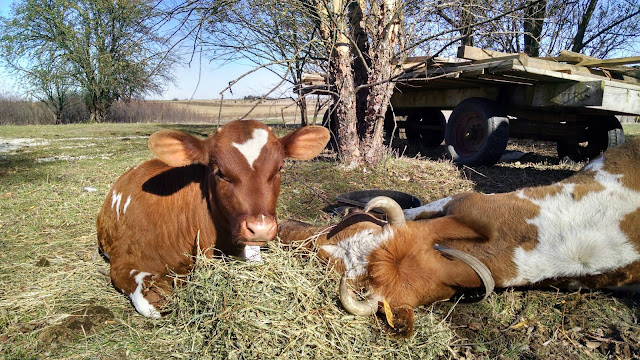 The little guy stood by her a long time and then finally laid by her side as did our two guard dogs and several of our ducks! A wake of sorts that carried on even after her body was disposed of; her calf laying on the sight where she was last. He's doing well now but it was sad to watch.

So, the first time in  over 22 years, we are without our own milk cow and we face a multitude of problems to be solved. The most glaring one is where to get the raw milk we relay on for our health? We have a one week supply left from Polly and then we are dry as she.

We have become picky in our quinquagenarion years and want raw milk from a 100% grass fed dairy. To our knowledge there are not many of those in Illinois. On our old farm our customers often drove 100 miles for our raw milk. Now we're the ones in a bind. Yeah, the irony. We are considering replacing Polly with a goat but I've never been a fan of goat milk. It's just so...goaty. Decisions, decisions. Guess this wanker needs to get stop whining and find a solution.


Posted by Donna OShaughnessy at 4:22 PM