A Lemon of a Barn

What we thought was such a great idea, find an old building for cheap, tear it down, build it back up, has turned out to be a real shambles of a mess.

The man we hired to dismantle the old machine shed down did a fine job the first two loads, then; he got tired, or lost interest, or saw a purple moon or something. Keith ended up helping with the third and fourth loads and the last two loads might have been better just dropped off at the local landfill.

Here's the gist. The walls of the building were deconstructed well, a few dings but that is certainly to be expected. The posts and framework remained intact. But when it came time to deliver those loads to us, this guy didn't have the staff, so Keith got involved with the hauling part. Then when it was time to remove the metal roofing, our guy lost his head. We weren't there. Instead of detaching the metal roofing sheets from the trusses and then dismantling the trusses themselves, he cut the 2 x 4's that held the trusses together, thus compromising the entire roof structure.  Entire pieces of the roof (still attached to the wooden trusses)  just fell to the ground. It's a miracle no one was hurt.

Yes, we did verify he had his own liability insurance before we hired him.

Even his own staff later told Keith, "we argued about him doing it this way but he wouldn't listen." When Keith arrived on the site after the damage was done, he was told by the man we hired, "Don't worry, you can patch up those trusses." 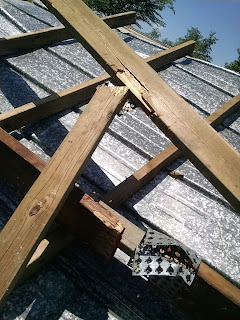 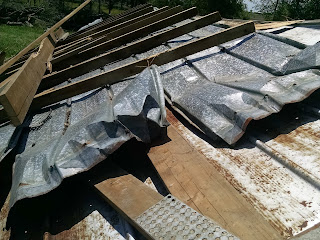 No. we will not. Many are shattered, splintered is the word I am looking for. The 2 x 4 's that held the trusses together have been cut through and the metal roof sheeting bent so badly in some areas, it cannot be straightened. We had agreed to pay $3000 for this task of dismantling the entire shed, and delivering it to us, but since Keith ended up pulling three trailers home loaded down without new building parts, and much of the roof has now been destroyed, we have so far only paid him $500. 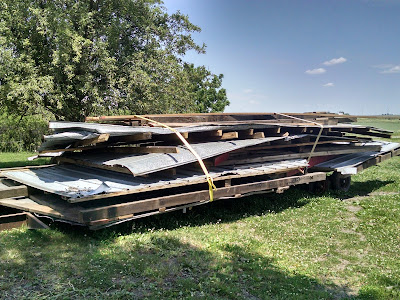 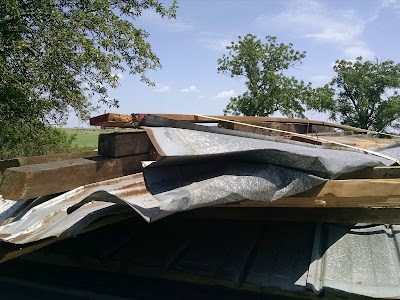 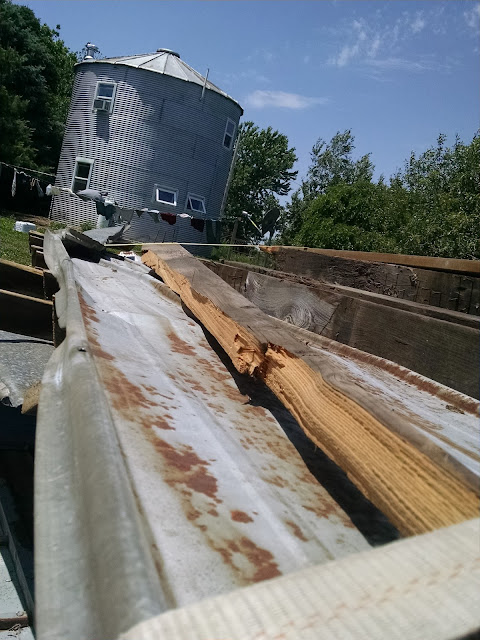 After Keith and I pick through the last trailer full of eviscerated roof sections, we'll know how much we'll have to spend to replace those pieces. Then Keith and our guy, who won't ever be "our guy" again, will negotiate a fair wage for the work done...and not done. It is so frustrating, We needed to save money, we like giving business to local folks, we have worked with this gentleman before, but our ability to trust others is waning.

It is circumstances like this that send newbie homesteaders running and screaming, back to their rent controlled condos. But not these two seasoned live-off-the-land nut jobs. No, we're too dumb to know when to quit.

So, we have a couple options. Use some of the wall siding to replace the metal roof panels that were destroyed, leaving us with a much smaller building than we need, OR dig deeper into a rapidly dwindling savings and purchase the metal and wood we need to build a new roof.

We won't be able to make this decision until we unload the last trailer full of barn parts that were deposited in our yard last week. We're not looking forward to this task, afraid it might be even worse than it looks, but when done we'll at least know where we stand.

In the meantime my husband has done an amazing job of clearing all the wood from our felled elm trees so that now we have a spot to build the barn, or at least part of it! 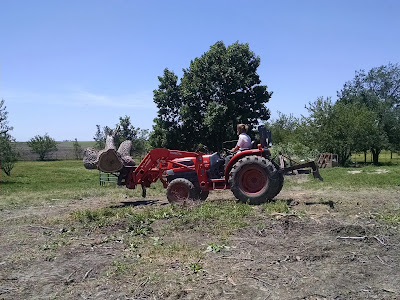 Posted by Donna OShaughnessy at 8:17 PM