Hurry up, it's LONG DISTANCE! My Outdoor Phone Booth 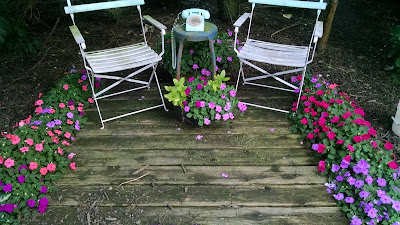 I miss that, the excitement that permeated the air when the phone rang and the caller at the other end, an aunt, a grandparent, or an old friend, from another state would call. If someone called long distance you ran to the phone, because it was expensive and you paid by the minute.

In that vein, I have a special spot here on The Poor Farm, complete with a vintage phone that once belonged to my Aunt Bernie. She never wasted time on the phone but got to the point quickly. Always sensitive to the financial needs of her siblings, she had never married and took her oldest sister responsibilities seriously, she gave or received information on the phone in a most efficient manner.

Time wasting conversations such as those about weather, family gossip or political arguments (she loved those!) could wait until she saw that caller in person. She died a few years ago at the age of 93 and I miss her. So when I wanted to create a quiet spot here I had to include her old phone which she owned and used for decades.

None of those lightweight, silly pink princess phones for her, let alone a cell phone.

The decking in this spot came from our old farm and is getting on in age. We'll need to replace it in a year or two. The impatients were an anniversary gift from Keith back in June. I lined up some old posts running parallel to the sides of the deck and filled the 6 inch gap with our compost. I blocked off the end with recycled brick to keep the soil in place. 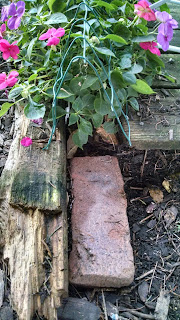 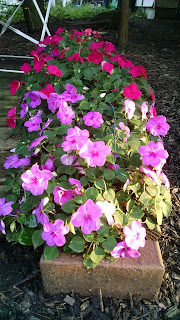 Over the top I placed some coated wire mesh to keep the chickens out. It looked ugly when the flowers were little but soon it was  barely noticeable. It took a couple months for the impatients to fill those areas but now in early September they look wonderful.

This spot, which is located between my clothesline and our front door to the Looney Bin , gets a nice breeze and is always in the shade. A cool oasis, especially earlier this week when temps were back in the 90's again. 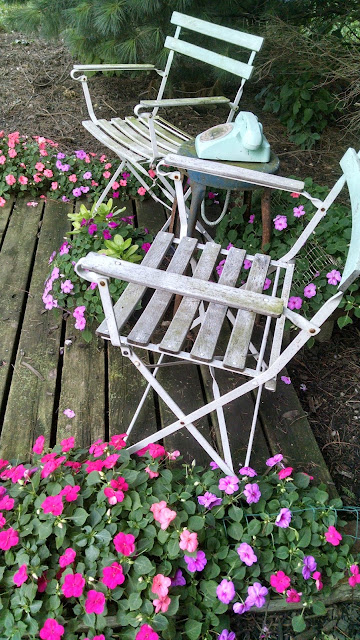 When the GK's visit we'll sit there and I'll let them practice dialing on the phone the old fashioned way. I'll pretend talk to my Aunt Bernie which cracks up the 3 year old grandson and makes the 10 year grandson roll his eyes.

That's why I'm here. Entertainment and embarrassment.
Posted by Donna OShaughnessy at 10:08 PM