It's all Colton's fault. Last year for Mother's Day our oldest son gifted me with a hand crafted gate for my kitchen garden. he apparently was listening when he heard me say-about a millions times- that I wanted a white picket fence for that space, one day. So he got me started with the gate. I have greatly enjoyed going in and out of it this past year. The rest of that garden spot was enclosed with a hodge-podge of wire hog panels and chicken wire. it wasn't attractive but it get critters out of that space and it was what we could afford at the time. 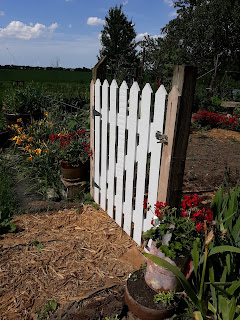 Several weeks ago I turned 60. It was a grand day altogether. My sister and daughter organized a surprise party at Destihl Restaurant in Normal, Il and we had a great time. Then my friend Jay asked me to come out to the parking lot so he could give me my gift, which was taking up space in the back of his truck. Voila! It was the remainder of the fencing I coveted. Several eight foot sections of Gothic Style Picket fencing. Eighteen sections to be exact. He also promised to help us install it and thats what he did, alongside Keith, this past weekend. 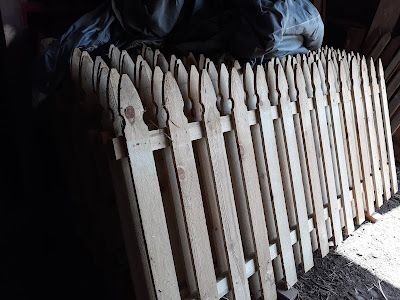 Prior to his coming though, I had serious work to do, get the fencing painted. Of course Jay's gift came with paint and brushes so in the hottest week we've had so far this summer, I got to work like Tom Sawyer. Well, harder than Tom because there was no Becky around for me to pawn off the work. 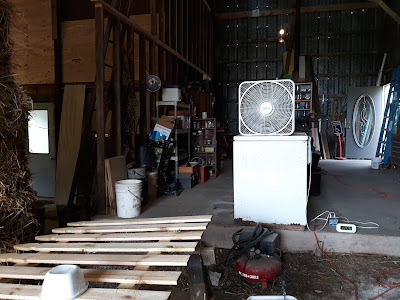 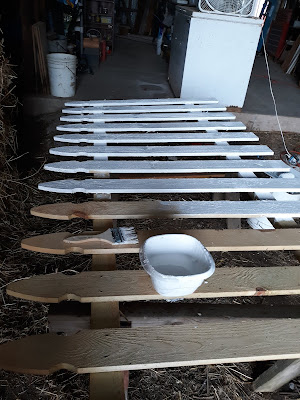 Then, as planned, Jay showed up this past Friday ready to work AND with a hydraulic post hole digger. Happy day. Although Keith has dug hundreds of post holes over the years with his manual post hole digger, he wasn't looking forward to it with the projected high heats. And criminy, did it get hot on Saturday when the guys did the bulk of the work. 97 degrees with a heat index of 110.

And what did I do while those two die hards were putting in the fence posts? Well I painted and painted and painted some more. Keith had built a second gate a couple weeks ago to match the one Colton had made and it needed painting too. Of course Keith built it out of scrap lumber pieces which shined up nicely with a couple coats of Behrs Wood and Fence Stain in Tintable White. That product was amazing! 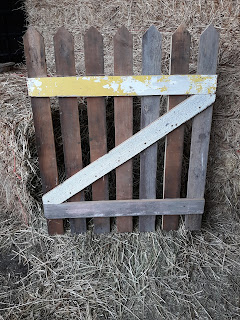 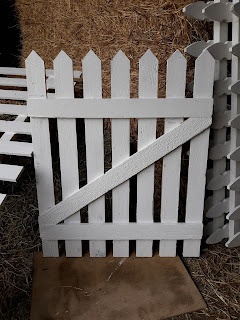 I also kept the fellows well supplied in cold drinks. By 9 pm that evening we were all sound asleep, exhausted.  Even with the hydraulic post hole digger, the work was strenuous taking both the guys and many muscles to hold the machine in place and or repositioning it when it hit heavy clay or rock. Most definitely a two man job. 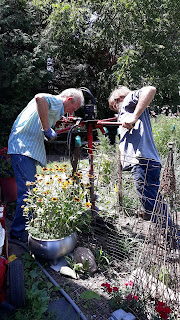 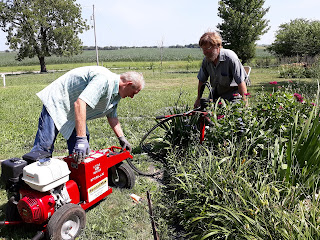 By Sunday am most of the posts were in place with only five more to go. They had that done by 10 am and started with the fun part of attaching the fence sections. We ran into a bit of a snag around the old well tiles I had filled with zinnias. They needed to come forward about two inches. At first the guys thought they might be able to just push the tiles (filled with soil and flowers) forward , but they quickly discovered they were too heavy. That's Jay below, trying to pull with his  legs parallel to the ground, while Keith is laying behind them, trying to push. Didn't work. 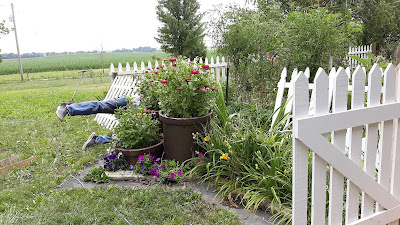 They then wrapped some chains around the bottom of the tiles and used the tractor to scoot them forward. It worked well, even though I was concerned the tiles might break. A few petunias were sacrificed as were several other flower plants during the whole fence installation, but I had expected that. In fact I was impressed with how many border flowers were saved overall. 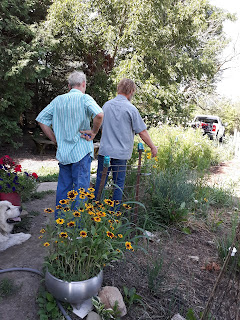 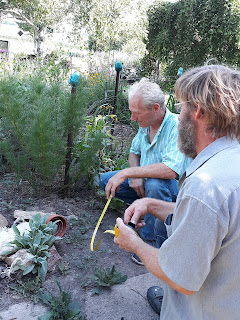 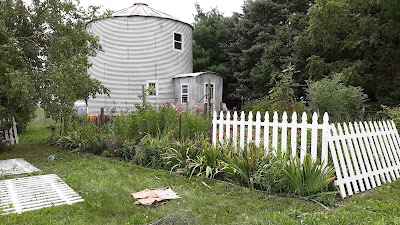 By 1 pm Sunday 75 % of the fence was up. The last section on the south side still had to be painted and installed, and the gate nearest the grain bin had to be hung but we were all ready to call it quits. The heat had worn us down. Keith and I will finish the rest of the fence this week, it's supposed to be much cooler,  and then I can get busy weeding that garden spot of ours. Below is the view out our second story window. Makes me so happy to have a white picket fence after decades of wanting one!! I am so grateful to my dear hubbie and dear friend for making this a reality. Happy 60th to me. 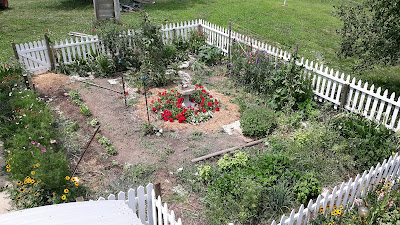 Posted by Donna OShaughnessy at 10:51 PM