Spring Cleaning and Painting and Framing and Finishing

We moved here in April of 2015 and lived in a dinky 1978 Shasta Camper for six months while we built our Grain Bin House. Move in day was mid October that year .

I'd like to say we moved in because the Grain Bin was complete but the truth was, we had no heat or bathroom in the camper and we were tired of showering outside. Brrrr. The rooms in the Grain Bin were dry walled, the stairs were finished, and the bathroom was functioning but that was about it. That winter we painted walls and built our kitchen.

Then we got busy with the next spring's garden and since I was still in school full time, all the bits and bobs inside were left undone. Like framing two windows, putting floor trim up, patching holes left by the dry wallers (and us), hanging the rest of the lights and putting a door on our bedroom, to name just a few.

But last week we got crackin' and dished out a few bucks at our local Menards in order to finish what we started. Problem is-space. It's too cold to paint outside or work in Keith's unheated workshop in the old creepy house, so we had to spread out in our living area downstairs. The rocket mass stove and my laundry rack both were put to use as substitute sawhorses. 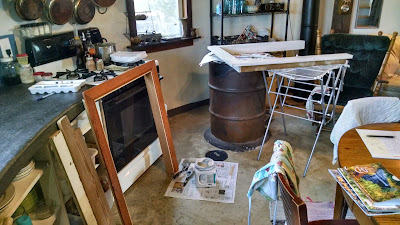 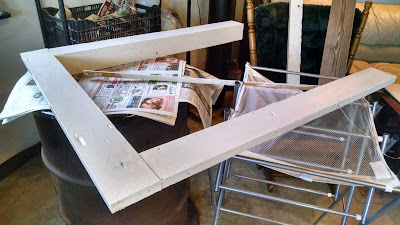 Quite the mess we made with all the window frames that had to be painted and then allowed to dry. Plus moving items out of the pantry in order to close in the stair case and paint it.

But, we are making progress on our to do list whether it looks like it or not. In Keith's regular fashion, he used all recycled wood for the window frames. Some came from a sister's kitchen remodel while other pieces came from the creepy house. A door frame there (easily 100 years old) became a new window frame here. Paint does work miracles. 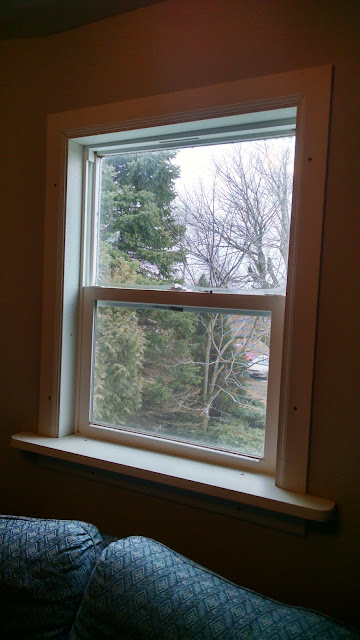 We still have drapes to hang in the upstairs among other things but we expect to have it all done before the weather warms up.

As soon as THAT happens we're back working on the barn!

Posted by Donna OShaughnessy at 6:55 PM