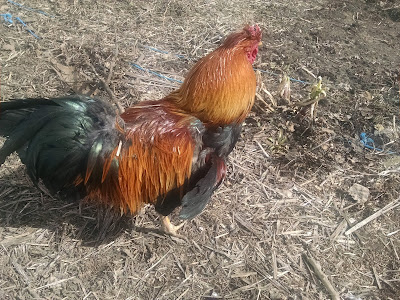 This is Wing. A diminutive rooster born and raised on The Poor Farm. For whatever reason he came directly out of his shell with a broken right ring. See how it hangs low, in the above photo. His siblings denied rough housing and his mother denied taking any drugs or abusing alcohol during his incubation.

The father has never been clearly identified.

We certainly considered a euthanasia approach to this little guy but his spirit was astonishing. he kept up with his family, stayed close to his mother and thrived. As he aged though we noticed his tendency to end up on his back; a balance issue we decided. 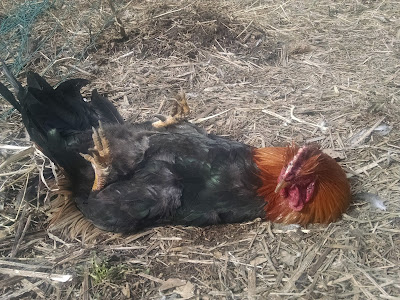 Once a larger animal, like one of our massive dogs, brushed against him, he'd get flipped over and be unable to right himself. Again, we considered sending him to the big free-range pasture in the sky. Instead we'd gently use the tip of our boot and "right" him. He'd take off to find his buddies. Perhaps embarrassed that he needed help. 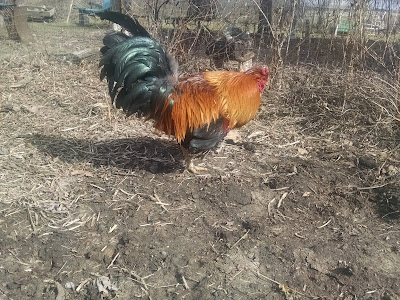 Over time he has become a loner, choosing to hang closer to our two dogs than to his own kind. Chickens are not always so considerate of the handicapped. At times another rooster will pick on him and he ends up on his back again. Oddly the bullying rooster then backs off, not wanting to be the jerk who picks on another rooster when he's down I suppose.

Now, into Wing's third year, it's become routine to have to "right" him once or twice a day. I worry that if he wanders too far and gets himself flipped over where we don't see him,  he'll simply succumb over a few days, but he seems to know to stick close.

He knows the dogs have the best food and prefers to eat with them, so why wander?
Posted by Donna OShaughnessy at 1:35 PM